The battle of Jutland was the largest, most written-about and most controversial naval engagement of all time. The battle’s outcome was central to the history of the First World War. It was the turning point in Germany’s maritime strategy and  heralded the launch of the unrestricted submarine war that brought America into the war on April 6th, 1917.

It’s important that the history and lessons of Jutland are passed onto new generations whose language is digital and whose values have evolved.  This is the metric of success. The Initiative seeks to communicate the wider story using animation, interactive museum displays, podcasts and crowd sourced participation for on-going research.

The initiative’s ultimate goal is to provide a digital curation of  the important Jutland memories and learnings and to help create a revived interest in our common history and a passion for learning.

Listen to Nick Jellicoe, author of Jutland.The Unfinished Battle, talking with a friend, Caroline Buchler, about the book. He speaks about what motivated him, how he’s trying to innovate and what he hopes will be achieved with the Jutland Centenary Initiative. Short and long term.

Podcast One : Why Jutland was decisive.

Animations of the Battle

Watch a 24 minute narration by Nick Jellicoe of the Battle of the Jutland with the aid of animated maps, graphics and contemporary photos. Nick explains the battle itself and the 1917 submarine war that resulted when the German Fleet commander, Admiral Scheer, persuaded the Kaiser and the Cabinet that Germany could never win a traditional Fleet-to-Fleet encounter with the British.

Positive reviews for the animation

“Congratulations on the animation. I enjoyed it very much and will show it to my kids and friends. There is so much to the battle, so many layers”.

Awesome and thanks for sharing!!

That was awesome, very much appreciated!

Very good – frustratingly, it doesn’t have any credits on it about who made it. That makes it hard for anyone to think “Let’s Does anyone know the credits for this?

Thank you for an outstanding piece, I am an amateur student of military history and my father served in the Royal Navy during the Second World War, so I had some idea of the battle but this has made everything so much clearer. My German wife (and her mother) knew almost nothing and this has been an eye opener for them. I look forward to reading your book.

An outstanding production. The story told pragmatically, based on facts and with a cohesive and insightful narrative. This is how a military history video should be made. Thank you.

Congratulations on a brilliant film. the most concise and comprehensible account of the battle that I have read. I have forwarded the link to colleagues in the Royal Naval Association, so you may expect a lot of visits as the anniversary draws near.

Well you definitely succeeded in explaining the very complex ordeal that was the Battle of Jutland. If military history was presented in this form more often I think people would find it more interesting, a shame it has to be that way though. I’ll try my best to spread it around, that’s the least I could do for such a magnificent creation.

Beautifully done documentary; best picture I ever had of that very complex battle. 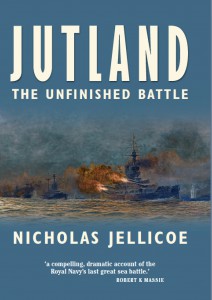 “The author, the grandson of Admiral John Jellicoe, commander of the British Grand Feet at Jutland, gives a compelling, dramatic account of the Royal Navy’s last great sea battle. His descriptions and analysis of the men, ships, tactics, decisions, successes and failures on both sides are scrupulously accurate and fair. And when he turns to Jellicoe’s shabby treatment after the battle by politicians, press lords, and carping ,quibbling, jealous lesser admirals, he is equally professional and accurate. The measure of Jellicoe’s achievement is that the great German admirals, Scheer and Hippper, never brought German High Seas Fleet, the Kaiser’s pride and joy, out again to contest  the mastery of the North Sea”

“Jutland: The Unfinished Battle is a lively and engaging analysis of the controversial fleet action that combines new material with the sympathetic but not uncritical perspective of the British Commander-in-Chief’s grandson. It takes a fresh look at many questions as to the conduct of the engagement that continue to this day to stir controversy and debate.”

Rear Admiral James Goldrick, RAN (ret’d), author of The King’s Ships were at Sea and Before Jutland.

“Nicholas Jellicoe has not set out as an apologist for his grandfather. He has tackled head on the issues that the conduct of the battle raise – gunnery, ammunition, ship design, tactics, communication, intelligence. This is marvellously enthralling account of the battle that combines academic thoroughness with a unique element of personal observation. I found it totally absorbing and cannot recommend it highly enough”.

Commodore Peter Wykeham-Martin, Chairman of  Friends of the NMRN (Portsmouth)

“Thankfully, we now have a superb analysis, Jutland: The Unfinished Battle (2016), from Nicholas Jellicoe—the admiral’s grandson. This source at first sight might seem to be prejudiced, but that is not the case. Obviously aware of the possible suspicion of bias because of his last name, Nicholas Jellicoe has gone out of his way to offer both the general reader and the naval expert a balanced, measured, and yet nuanced account of the greatest sea battle of World War I. He weighs and measures. He offers conflicting accounts and interpretations. He evaluates sources. He compares British and German eyewitness and official accounts and statistics. He judiciously examines the accounts by John Harper, Reginald Bacon, and the Admiralty discussed above. And then he offers his own best opinion. Along the way, he provides the layman with text boxes and sidebars to explain the complex naval systems in place at Jutland, and he further includes countless diagrams to explain ship locations and movements.”

The tactical and operational focus of Nicholas Jellicoe’s outstanding book is the right one. Jutland was a tactical and operational battle; neither side appears to have gone into battle with a clear understanding of how the outcome would fit into the war’s overall strategic aims. This is a book not to be missed by serious scholars and students of the Great War at sea – his evidence and argument ‘finish the battle’.

This is a marvellously enthralling account of the battle that combines academic thoroughness with a unique element of personal observation. I found it totally absorbing and cannot recommend it highly enough.

…This book, despite its author’s relationship to Jellicoe, does not eulogise the admiral but objectively lays out the whole Jutland story and offers a comprehensive and very readable narrative which the reader, newly coming to the Jutland battle and controversy, will find satisfaction that the author has addressed all aspects of the battle itself, its preludes, consequences and aftermath.

The book is intended as a centennial publication and it is supported by the author’s website Jutland1916.com which he recommends visiting while reading the book. The website provides a ‘rapid-fire’ 20 minute coverage of the battle graphically illustrating the tactics and complex manoeuvring (so rapid-fire that repeated visits are recommended!). As such the reader is relieved of the need to scrutinise complicated diagrams of the battle cruiser, battle fleet and destroyer actions which the website competently handles. Instead Jellicoe provides four very clear diagrams in the book: a prologue to the battle, the battle cruiser action, the battle fleet action and the night action. An additional useful feature are vignettes inserted in the battle narrative explaining various tactical aspects such as signalling, range finding, course plotting and gunnery performance…

… In summary Jutland: The Unfinished Battle is a worthy addition to the enormous Jutland literary compendium. The author’s familial links to Admiral Jellicoe, his graphic website supporting the book and his balanced, objective treatment of the subject make this book well worth reading. However, Jutland tyros should be warned that they may find themselves joining the ‘unfinished battle’ should they chance their arms by investigating the works described in the final chapter.

Nicholas Jellicoe is well placed to write a deeply felt, and highly personal, analysis of the great events that unfolded in the North Sea and their consequences both in the UK and also the wider world. The grandson of Admiral Sir John Jellicoe, the commander of the Grand Fleet – Britain’s massively powerful primary naval striking forces – he has in Jutland: The Unfinished Battle produced a thoroughly researched and absorbing work. It represented a journey of discovery, finally getting to know his grandfather whom he never knew in person. Nicolas Jellicoe writes of his granddad that he turned out to be ‘a complex, sometimes flawed figure, but one who I have come to greatly admire’. Yet, while he does have a personal investment, this does not insert an oppressive bias – he reveals the admiral’s weaknesses as well as strengths…

… Jellicoe has coped brilliantly with knocking into shape the vast mass of technical and tactical detail – which a battle as massive as Jutland serves up in a mind boggling scale. Notable features are the excellent, easy to understand maps and also explanations of certain aspects in boxed out form…

… Jutland: The Unfinished Battle is an excellent addition to the vast array of literature about the epic clash. May this ‘neophyte writer’, as he calls himself, carry on writing naval history.

… This is an exceptionally well written and researched account which provides an insight into the relationship between high ranking officers of that era. All-in-all this is a good read and is very highly recommended.

The best narrative account of the battle currently available.

This book gives an excellent account of the battle, overall, and is recommended.