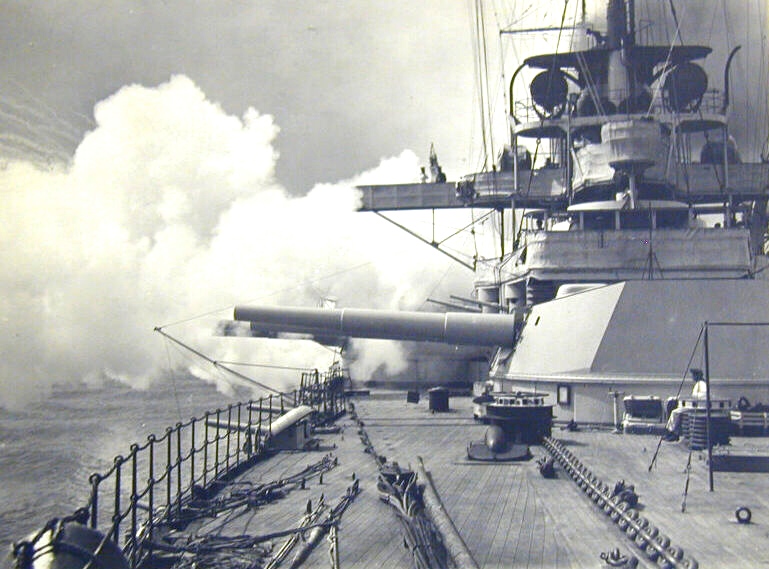 Ersatz Würtemburg. Constructed in great secrecy like Nassau under naval guard and concealement.

All Action reported in CET.Divisions in the battle line consisted of the III, I and the II. She was 2nd ship in the division behind Posen. Rear Admiral W. Englehardt commanded the Division. After the dreadnoughts came the pre-dreadnoughts in the line. 17:48 - 17:52 engaged the forward scouting group of Beatty's BCF, the 2nd LCS.Reputed to have scored a hit on Southampton at 20,100 yards at 17:50.18:02 targetting what was probably HMS Southampton. With the 20:15 reversal of course, Rheinland became third from the front, behind Westfalen and Nassau. At 22:00 spotted light forces gathering, flashed a signal which went unanswered. Two ships turned off to starboard anticipating probable torpedo launches. At 00;00 Nassau comes into contact with the Spitfire where a ramming incident ensued. Nassau was damaged and had to slow to 15 kts. She was hit with two 4" shells from British destroyers. At 00:30 a fight broke out with Black Prince at a range of only 2,200 yards. Other ships turned away but at 00:36 Rheinland was hit by two 6" shells that BP had fired. One cut the forward searchlight cables. At 01:15 she opened up pn another destroyer, possibly Ardent. An hour later, after 01:00 came into contact with the Black Prlnce. Thüringen let loose with 27 heavy and 24 secondary shells.Nassau, Ostfreisland and then Friedrich der Grosse joined in. Nassau had to reserve engines to avoid the wreck after the explosion and rejoined the line behind Hessen and Hannovr. Lastly, around 03:10 three to four destroyers again attacked at 5,500 yards. Nassau turned to starboard 90 degrees to avoid the torpedo.Then GK under fire from British battle line and hit 7 times 20:18 to 20:19, three of which were 13.5" shells from Marlborough. Barham or Valiant's 15" were the remainder. Destroyed the port side No.2 wing gun while the other hit the main belt causing 4 degree list after she took on around 800 tons of water (By the time she reached home waters, she'd taken on around 3,000 tons).In the night formation was the 15th ship. Attacked at around 02:45 by 6 british destroyers. GK managed to hit one with 15 cm fire (the Nessus) and disabled her boilers.