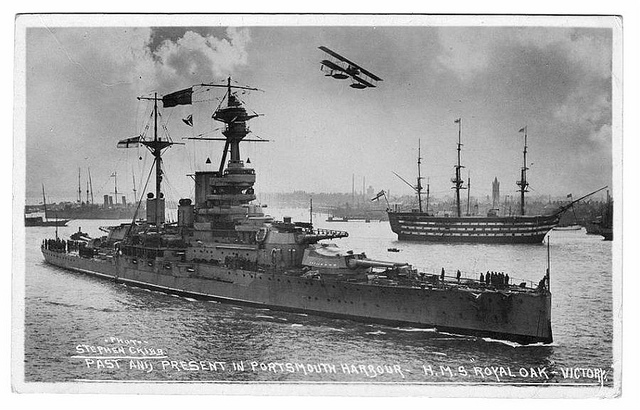 Royal Oak "Mutiny" in early 1920s involving Captain Keneth Dewar, the author (with his brother) of the infamaous "Naval Staff Appreciation. In fact, it was more about the breakdown in relations between Dewar, Commander Henry Daniel and Rear Admiral Bernard Collard over a trifling matter to do with the band at the wardroom dance.

Sunk by U.47 (Captain Günther Prien) 14th October 1939 at anchor in Scapa Flow. 833 Killed or died or wounds out of a complement of 1,234. Memorial to the crew in St Magnus Cathedral, Kirkwall, Orkney. Three days later HMS Iron Duke was bombed and her plates damaged by the concussion blasts.

Fired total of 38 15" shells and 84 6" shells. Claimed three hits on Derfflinger, and one on SMS Wiesbaden. Straddled during the action but undamaged.

Oil fired boilers (decision to change taken while in construction)