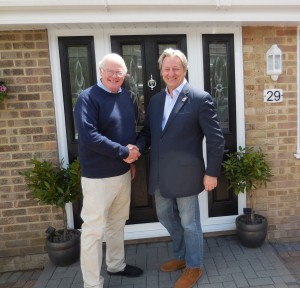 Just after having received the Equal Speed Charlie London lapel badge from David Smith. A pin that I will particularly treasure.The signal to deploy the Grand Fleet was made by Admiral Jellicoe on 31st May 1916 at 18:15. The hoist consisted of the “equal speed” pendant, the letter ‘C’ (“charlie”) and the letter ‘L’ (“london” (in the then-current phonetic alphabet)). The signal directed his fleet to change from a column formation to a single battle line steering course Southeast by East, while maintaining the current speed. The flag signal was later adopted as an unofficial badge of HMS Mercury, the Royal Navy Signal School located at Leydene, Hampshire from 1941 to 1993 and is still worn as a blazer badge by some ex-Royal Navy personnel today. 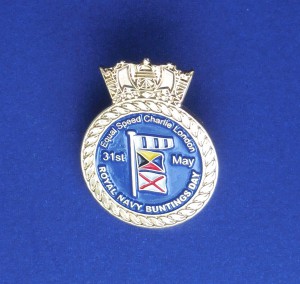 In 2014, the 31st May was adopted as `Buntings’ Day’ when ex-naval signalmen worldwide meet annually to commemorate their profession and to drink a toast at 6.15 p.m to all naval signalmen, past and present.  The idea of ‘Buntings Day’ and everything related to it was the brainchild of ex-Bunting, WOCY Dave Morris.The `Buntings’ Day’ badge incorporates the flaghoist `Equal Speed Charlie London’ (`Bunting’ is the naval nickname for `Signalman’, and derives from `Bunting Tosser’, bunting being the material that naval flags are made of).

Further information on “Buntings Day” can be obtained from Dave Morris at mdmorris118@gmail.com