Posted at 22:38h in Uncategorized by njellicoe 2 Comments
0 Likes
Share 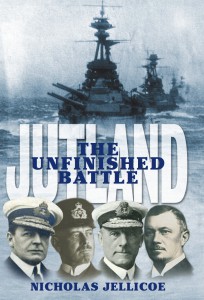 My book will be published in March 2016 in the UK by Rob Gardiner’s Seaforth Publishing and in the United States by the Naval Institute Press.  It has been – is (as we are still correcting typos)  – an enormous commitment. But it’s also been an equally rewarding and passionate road to have walked and the friends that I’ve met (and continue to meet) one of the greatest of pleasures.

The book will be supported by animations on Jutland1916.com which will be launched as a site (in addition to the current blog) on November 11th. The site will aim to give educators materials for teaching but also contain materials for naval history buffs. It will also contain a mass of materials on the Jutland ships, gunnery and signals as well as the admiral’s press clippings never before available in one place. Site visitors will be able to find out latest news on Jutland events, places with Jutland connections and personal stories that are only just now emerging.

Pre-ordering is open on Amazon.co.uk.