MAYBE NOT THE MOST APPROPRIATE SALUTE TO THE WIESBADEN MEMORY? - The Battle of Jutland - Centenary Initiative
32924
post-template-default,single,single-post,postid-32924,single-format-standard,ajax_fade,page_not_loaded,,qode-child-theme-ver-1.0.0,qode-theme-ver-9.1.3,wpb-js-composer js-comp-ver-4.11.2.1,vc_responsive

MAYBE NOT THE MOST APPROPRIATE SALUTE TO THE WIESBADEN MEMORY?

27 Nov MAYBE NOT THE MOST APPROPRIATE SALUTE TO THE WIESBADEN MEMORY?

Posted at 21:47h in Uncategorized by njellicoe 2 Comments
3 Likes
Share 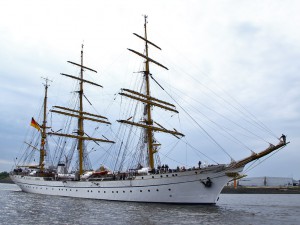 A  video captured the moment when the German navy’s training ship, the Gorch Fock, collided with a sea wall as she was coming back into Wilhelmshaven this Wednesday, November 27th. Unfortunately, it became unavailable almost immediately. I tried a number of sources without success. The damage didn’t seem to have been extensive. It was more of an embarrassment but was painful, to say the least, to watch.

The ship (I believe she’s the second one) was named after the writer and poet, Johann Kinau, better known by his nom de plume, Gorch Fock. Kinau was killed while serving on the SMS Wiesbaden at Jutland. Like many of the casualties – British and German – his body was carried ashore in Scandinavian waters by the currents. In his case, his lifeless body was washed up near the small Swedish town of Fjällbacka, just north of Gothenburg. It was where Ingrid Bergman’s ashes were scattered although today, Fock’s body lies interred next to the graves of British sailors on the small island of Stensholmen. 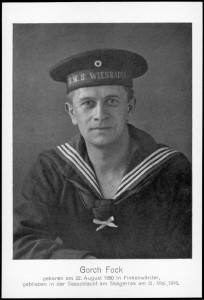 Together with the Frankfurt, Pillau and Elbing, the SMS Wiesbaden played an important part in the attacks on HMS Chester and HMS Defence. All her crew (with the exception of one stoker, Hugo Zenne) died.