Posted at 12:34h in Uncategorized by njellicoe 4 Comments
5 Likes
Share 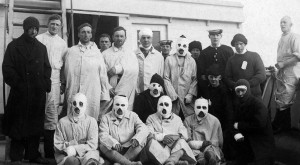 Burn victims from HMS Tiger after the Battle of Jutland. On board the hospital ship, HMHS Plassey. Courtesy of the National Museum of the Royal Navy, 1990_296_27.

The National Museum of the Royal Navy’s JUTLAND IMPACT PROJECT will shortly be launching a platform onto which we can all upload our family memories of Jutland. Nick Jellicoe talks about his grandfather’s legacy with museum staff surrounded by artefacts of Britain’s naval past.

One of its objectives is to get as close as is possible – for the first time –  to having a full database of all the people who actually participated in the battle. And there were more than 100,000 sailors on the seas on May 31st 1916. The site will allow families to find where there ancestors lived on maps that showed the urban & country landscape as it was 100 years ago. It is really exciting  to be part of this project.