Posted at 21:09h in Uncategorized by njellicoe 2 Comments
0 Likes
Share 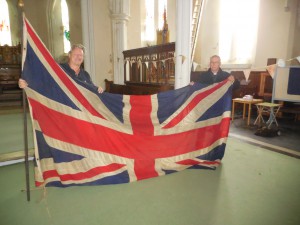 HMS Iron Duke’s Union Jack, probably given to the Church in the 1920s by Admiral Jellicoe, is being graciously loaned back to the family for the duration of the commemorations.

The flag will be on display at the September 15th opening of the Gert Normann Andersen’s SeaWar Museum in Thyborøn. Till now she has been holding a silent vigil at the Church of the Holy Trinity in Ryde. Her colours have been remarkably well preserved because she has not been in direct sunlight. 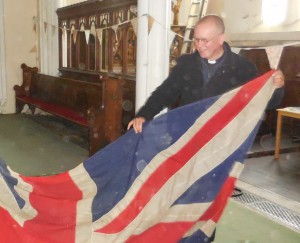 A dusty job. Peter Sutton giving me a hand packing the flag