Posted at 22:37h in Uncategorized by njellicoe 0 Comments
0 Likes
Share 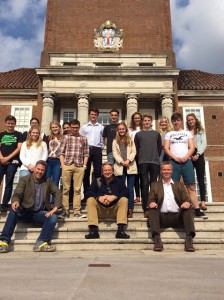 The Rob Mann (l), David Barker(r) and students at the Royal Hospital School. In 1694, Queen Mary created an orphanage for children of naval personnel who died at sea in the service of their country. That orphanage has grown over the last 300 years into the Royal Hospital School. With its 700 students aged 14-18, the school’s foundation stone was laid by my grandfather, the Admiral, in 1927. Later both my grandmother, Gwen and my father, George, who was the last First Lord of the Admiralty and Minister of Defence for the Navy spoke there. It is the most distinct honour to me to have been asked to be the principal guest for the commemoration dinner and Speech day in 2016.

I  could not have been made to feel more welcome by both staff and pupils as well have failed to have been impressed by the respect for tradition which this school has made its hallmark.

As an aside, the amusing video of the Admiral’s visit and the pupil’s dancing the hawnpipe should amuse some of you.

Dancing the hawnpipe at the Royal Hospital School

Sorry, the comment form is closed at this time.