HMS ABDIEL – HER ROLE AT JUTLAND

Soon after the main battle commenced, Abdiel took up her station close to Jellicoe’s flagship. the Iron Duke. The ship, with a full load of mines, was effectively a floating bomb which could easily have been detonated by a single enemy shell whilst their own 4inch guns did not have the range to participate in the fleet action. However, the Abdiel remained unscathed and the main action was broken off at about 21:00 when the German fleet began to retire towards its base at Wilhelmshaven.

At about 21:30, Commander Curtis was ordered to proceed at high speed towards the German coast to extend the minefield he had previously laid off the Horn Reef (on May 3rd and 4th) and in the path of the retiring German fleet. To achieve this, he had to take HMS Abdiel through the ongoing but somewhat scrappy battle between the opposing squadrons and get behind the German fleet. Had Abdiel stumbled across even a minor German warship the results would probably have been fatal but Commander Curtis succeeded

in his task and laid the mines off the Horn Reefs at between shortly after midnight in the morning of 1 June. Abdiel then returned to her base at Rosyth, again passing through the High Seas Fleet. Later, at about 06:30, the German battleship, SMS Ostfriesland on its way back to Wilhelmshaven, stuck and was damaged by one of her mines. Admiral Jellicoe, in his formal report, wrote the following:

“Abdiel, ably commanded by Commander Berwick Curtis, carried out her duties with the success which has always characterised her work.”

Commander Curtis own account, written as a letter. was very understated :

“Abdiel had no active part as far as fighting was concerned in the Battle of Jutland, and one cannot make a good yarn out of it. Up to the time of meeting the Germans we were working with the 4th Light Cruiser Squadron, stationed 5 miles ahead of the Battle Fleet and steaming in line abreast, ships a mile apart. When the fleets sighted each other and the deployment signal was made, the 4th LCS went off to their station ahead of the line but Abdiel remained where she was until the fleet had nearly completed deploying, by which time the “overs ” from the Germans, strafing two of our four-funnelled cruisers about half a mile south-west of us and the three battle

cruisers led by Invincible about half a mile to the south-east of us, came buzzing about and bursting round us. I, therefore, legged it round the head of our battle line, which had finished deploying, and managed to get through four lines of destroyers taking up their position ahead of the fleet, and finally got to my battle position half a mile or so on the disengaged beam of the Iron Duke. Here we remained until dusk. At about 9.30 pm I got orders to proceed to a position south of Vyl Lightship and lay a line of mines. We therefore went off at 32 knots, passing on our way several ships in the distance, and also a flotilla of sorts which were making a great deal of smoke, but as we were not making any smoke ourselves, we presumably were not seen. We reached our position about 1 a.m., and laid the mines, then returned to Rosyth for another load, passing south of the big North Sea mine area. Abdiel was not hit during the battle, and did not have any action with any German destroyer or big ships, but we got a very good view of the whole show between 6 and 8 p.m. We had 80 ordinary mines and 10 Leon mines on board, all primed, so perhaps it is just as well that we weren’t hit. The ship did exactly what she was intended to do, justified her existence, and that’s all there is to it.” 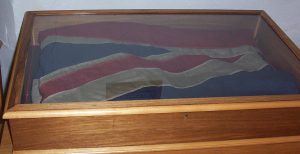 The Battle Ensign flown by the minelayer HMS Abdiel at the Battle of Jutland (which normally would have flown from the foremast or mainmast) was left at St Mary’s Church, Lawford by her captain, Commander Berwick Curtis. Originally it was on public display but it seems to have been removed and stored in the Church away from public display in recent years.

(Kindly submitted by David MacDonald and based on his account).