A friendship that has lasted through generations

The opening shots of the battle of Jutland were fired at 14 :28 by the light cruiser, HMS Galatea, out on the easterly wing of Sir David Beatty’s Battle-cruiser Fleet. She was part of the 1st Light Cruiser Squadron with her sister ship, HMS Phaeton.

On board was the father of my own father’s best boyhood friend, Tim Marten. I know Tim’s daughter, Jenny Ingham Clark, and her brother, Michael, wrote about Tim’s life and his memories of my own father, George (Lorna Almond. A British Achilles.The life of George, Earl Jellicoe)

One such occasion was when George had his friend to stay with him over the holidays at their Isle of White house, St Lawrence Court just abover Ventnor. George persuaded Tim to go peach picking in the garden even though he’d been expressly forbidden from doing so. The peaches were being allowed one final day of ripening on the trees before being served at tea for some special guests. Neither King George V nor his wife Queen Mary enjoyed the fruits of the Admiral’s garden.

Frank Marten ([Francis Arthur Marten, 1879 – 1950), Tim’s father, described the some of the highlights of the day. One was the meeting of the two British fleets – the battle cruiser Fleet and Grand Fleet and the incredible complexity of the deployment at « windy corner ». He also told the story of the chance meeting with the German Fleet. The Galatea had been late receiving the signal to turn north and rejoin the main body of Beatty’s fleet as he steamed northwards to make the rendezvous point with Jellicoe’s Grand Fleet.This meant that she continued on her easterly track and eventually saw the smoke from the stationary N J Fjord. The Germans saw the same smoke and the Elbing sent two destroyers in to have a closer look. The B.110 and B.109 sped off and while one stood off, the other sent a boarding party. The Germans were seen by the Galatea which signalled Beatty and then at 14,000 yards, her maximum range, opened fire. 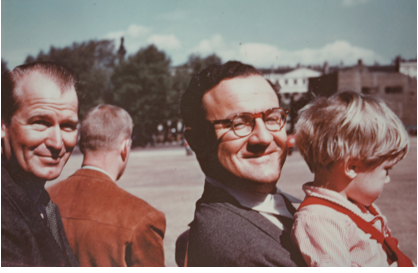 Tim Marten (L) and my father, George, with my elder brother in his arms (Private Collection. On the left)

Tim Marten and my father remained friends till my father’s death in 2007. Tim passed away a few years later.