Like Agincourt, build originally for the Turkish Navy, HMS Canada was built for the Chilean navy. The 28,600 ton battleship was based on the Iron Duke design but carried heavier guns (14inch) and had an extra three foot beam. Unlike the Turks, the Chileans actually wanted to sell one of their ships and accordingly HMS Canada was brought back and completed her refit in September 1915.

HMS Canada at Jutland during the deployment. She is astern of HMS Superb.

After the war she was sold back to Chile and became the Almirante Latore. 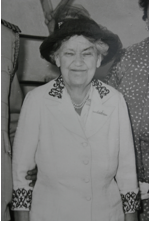 The Dowager Countess Jellicoe on a visit, I believe, to the Almirante Latore (date unknown, private collection).

She is wearing a pin depicting HMS Iron Duke.

HMS Canada has been lovingly restored by the Friends of the Royal Navy and will be part of the NMRN Jutland Exhibition in May 2016.