Help us raise money for heroes.

Pat Avery, grandson of the Telegraphist who served in the torpedo boat destroyer HMS Ambuscade during the Battle of Jutland 100 years ago, has published a book, written to raise money for the Royal Navy’s principal charity. 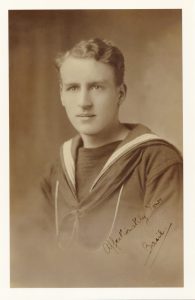 The book, Duel in the North Sea: HMS Ambuscade at Jutland (Sea Funnel, ISBN 978-0-95479-5313 £10), has been released to commemorate the centenary of the battle, and documents what was the most intensely contested and significant naval engagement of the First World War. All proceeds from the sale of the book goes directly to the Royal Navy & Royal Marines Charity 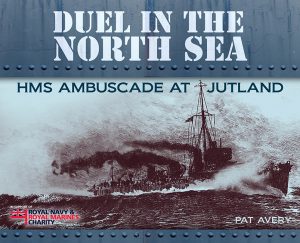 As a direct descendant of one of the sailors involved in the Battle of Jutland, Pat, together with other family members, was invited by the Government to the special Centenary commemorative service held in St.Magnus Cathedral, Kirkwall, Orkney on 31st May, an event attended by HRH The Princess Royal, The President of the Federal Republic of Germany, and Prime Minister at the time, David Cameron.

Pat said afterwards “It was a tremendous honour and privilege to be present on such a momentous occasion. Not only to remember my grandfather, but all the officers and men on both sides, particularly those who made the supreme sacrifice.”

Another highlight for Pat in connection with the book was an appearance on the BBC TV programme Songs of Praise, which was first screened on BBC1 on 29th May.  Filming took place in Belfast aboard HMS Caroline, the sole surviving ship from the Battle of Jutland. 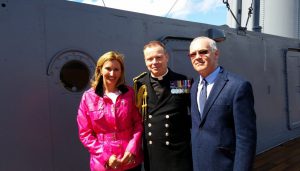 Pat Avery on HMS Caroline on May 29th 2016 where Songs of Praise was filmed.

Admiral Sir Philip Jones, First Sea Lord and Chief of Naval Staff, said: “This book is a personal contribution from a naval family, but it also reflects our national story. Britain was dependent on the sea for security and prosperity in 1916, just as we are today. The Battle of Jutland ensured the Royal Navy retained its supremacy. Famous for being a clash between battleships, this book rightly remembers the men who served in the numerous smaller, but no less gallant, ships of the Grand Fleet and the vital role they played in the battle.”

Lauren Wileman, representing the charity, said: “The book gives an excellent personal insight into the battle. We are very grateful to be receiving 100 per cent of the profits from the sale of copies of the book. It is an extremely generous gesture from Pat in support of the Charity. Donations generated from the book will go toward helping naval veterans of all ages, as well as those serving today and their families.”

To order, please visit the publisher’s website at:  www.seafunnel.co.uk