The fates would not give him a second chance

On 28th October 1914, at the time Turkey entered the 1st World War my grandfather, Rowland Lickbarrow Randle, a Royal Navy petty officer, was ‘serving the pinnace’ at the British Embassy in Constantinople (now Istanbul). He and another petty officer were required to stay behind and destroy anything in the embassy that might be of use to the enemy and then make their way back to England in borrowed civilian clothes. To enable their escape they were given a special passport to give them safe conduct through Bulgaria where they were to get on any available merchant ship they could find bound for England.

Had it been known they were in the British Navy they would have been killed or imprisoned. They managed to get on a ship and in mid ocean a passing British war ship was stopped from which one of the crew identified Rowland and he and his colleague were transferred to the war ship and returned to England. 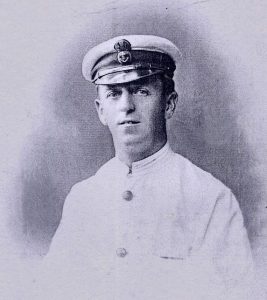 Fate was not kind though as on return he was posted to the HMS Indefatigable which was the first ship to go down at the Battle of Jutland. Had the merchant ship he had found passage on not been intercepted and he had arrived back in England a little later then he would probably have been posted to a different ship. 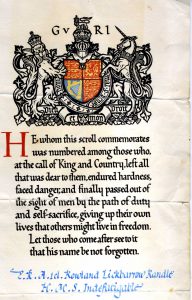